Thank you to each and every artist who submitted their work!

Congratulations to Nevin Speerbrecker, Brian Whitfield, Azalea Miller, Ariana Moreno, and Sofia Perez as the winners of the LAFCU Serves Series. This series is a traveling art exhibit combining the talents of five Michigan artists. The series supports products, community, and our statewide membership.

Nevin Speerbrecker’s letter “L” was influenced by Michigan’s rural winding road landscape and the LAFCU theme of  “around every corner.”

Nevin Speerbrecker grew up in Lansing and Lansing Public Schools and studied art illustration at Lansing Community College. He has works as a Graphic Designer/Illustrator in and around Lansing. Recently exhibiting his work in several area Micro Breweries and doing illustrative covers for Lansing’s Own City Pulse Newspaper. 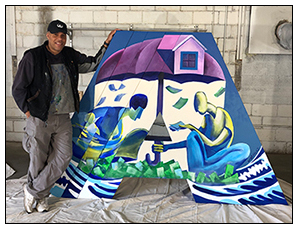 Brian Whitfield’s letter “A” is influenced by the shape of the letter itself. The top of the “A” was a perfect frame to create an umbrella. The umbrella represents the protection a family receives when they refinance a new roof. They are also amazed at the energy savings that have accumulated by making such a wise decision.

Lansing professional graphic/fine artist known for painting the “Under the Bridge” murals and designing the Michigan Mackinac Bridge license plate. Brian Whitfield received an illustration’s degree from Kendall College of Art and Design in Grand Rapids and later received his masters in painting from The Maryland Institute College of Art. 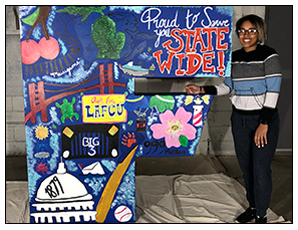 LAFCU serves you statewide. This is awesome not only because of the multiple ways to access your financials, but also amazing because it’s rooted in Michigan. To me, what better way to show Michigan then to depict what makes the mitten special. From the state flower, to the state capital, to Detroit being the “car capital of the world,” I wanted to encompass the many features of Michigan and show that LAFCU is deep rooted within its community.

Lansing, college graduate and self-taught artist with plans to become a midwife. 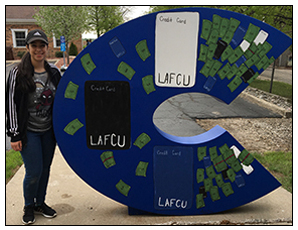 My inspiration was LAFCU. I wanted to focus on LAFCU because I want the audience to see what LAFCU is capable of. What better way of showing off that then painting their new creative ideas like their new credit cards. I also want to show money going in and out the letter C, just like the credit union LAFCU.

Waverly High School senior with plans to advance her art knowledge and skills. 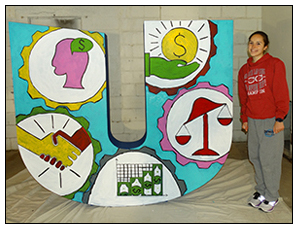 I chose to base my art on the credit union concept of “people helping people.” I chose the letter “U” because credit unions are dedicated to YOU—the people that they serve through their various financial services and guidance. I chose to break down their philosophy into a few key ideas depicted in different gears within my letter. I chose to put these key concepts in gears, because every aspect of “people helping people” is needed for credit unions to successfully implement this idea in order to truly improve financial stability and strengthen their connection with their members.

I am a recent 2019 graduate of DeWitt High School and current student at University of Michigan Ann Arbor Class of 2023.